In 2012 the Xibo Project saw some excellent growth and some equally good improvements to the platform – we are aiming for the same in 2013 and want to push forwards to offer some great new features. Here are a few highlights of the last 12 months!

So what can you expect? Looking ahead to 2013 we have 3 main goals on our road map… 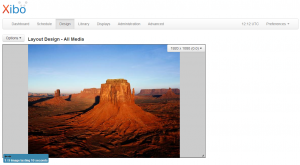 We have been hard at work implementing a cleaner, more professional, easier to use theme for the content management system. It is due to be released as a development preview shortly and we hope will bring a fresh experience to the Xibo User Interface. At the same time we have been adding a workable theme engine so that you can add your own feel to the User Interface and have a sensible upgrade path once you have done so!

Many of the basic features in Xibo were born over 6 years ago and have remained mostly the same since then – we have become aware that a lot of items are very outdated and that we are missing some basic functionality offered by our paid competitors. We don’t like this situation and we will be working hard to improve it – the following areas are first in line for some TLC:

The API has been developed in the background for a long time – we want to bring this development into focus so that you can start using it to build applications and extensions to Xibo. The API will support all functions of the Xibo system and should allow 3rd parties to develop anything from a layout designer to a display management application.

A note on Android

As the project has become more popular it has grown into a large community and placed much more demand on our resources (which is excellent!!) – however it became obvious that we needed a way of commercially supporting the community platform. We decided to do this by launching a low cost, yet full featured Android client (Xibo for Android).

This has been a great success and has already allowed us the time to develop many additional features for the Xibo Project. A big thank you to all our BETA testers and customers so far.

We have also been able to continue our sponsorship of the Goldstone Griffins Football Club and we hope to be able to provide more support for this local team!