Elvia PCB group, established in 2003, is the number one French manufacturer of Printed Circuit Boards (PCBs). The group, whose headquarters are based in Coutances (Normandy, France), has some of the most sophisticated industrial facilities in Europe.

European leader in the fields of Aerospace and Defence, the group is also a major player in several other markets, such as Automotive, Industrial, Medical, Railway and Telecoms. The group has five production facilities, each with a specific area of expertise and market position. It has a turnover of close to 70 million Euros and 570 employees.

Internal communications across Elvia PCB Group were limited before Xibo was introduced. Not everyone in the production facilities has access to email, meaning that internal company announcements and updates couldn’t be efficiently communicated to the wider audience, limiting employee engagement.

Previously there was a system in place for manually checking printed forms when circuit materials arrived onsite. If units were missing or a series of products didn’t arrive, there would be a delay communicating that issue across the facility to all employees, which could again cause production delays.

Elvia PCB Group wanted to find a way to efficiently communicate production updates and information across their facilities. Vincent Boisseau, Network Administrator at Elvia PCB Group and main Administrator for the Xibo solution, explains how the group wanted employees, across teams and locations, to predict next steps in production and plan for any operational issues such as temporary setbacks or interruptions in production.

“Management wanted an easy to use, cost-effective Digital Signage solution, which would enable them to send information simply to a screen on the wall, without other devices or cables to worry about.” ~ Vincent Boisseau

Elvia PCB Group opted for a locally-hosted CMS with the Xibo for webOS Player. This player software is easily installed directly on the display screen, with no added hardware. This provides the group with a cost-effective and easy to roll out solution which is currently implemented across three of their five French facilities.

Elvia PCB Group is rolling out forty-three displays across three of their facilities in France. These displays share vital internal communications and production information.

Vincent explains how this information is displayed on the screens. “Part of the screen is directly connected to our production monitoring system, allowing us to show in real time what we call production orders, starting with the most urgent one. This lets the teams know straight away what's arriving and their next task.”

According to Vincent, another layout region shows dial performance reports with graphics about quality indicators, and the last part enables them to share the company's internal communications per site or for the whole company. This is information such as upcoming client visits, or messages for a specific team or whole facility.

The Xibo implementation is fairly new and production efficiency data is still being collected, but Vincent is positive about the future outcome. He believes that Xibo will help reduce potential delays in the Elvia PCB Group production lines. This could be done by generating dynamic production updates for all relevant employees.

“Xibo allows us to push vital production updates instantly to employees, instead of them chasing information via outdated technology.” ~ Vincent Boisseau 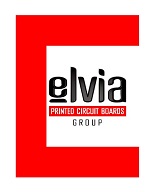